When a man sees a curious advertisement for a talking dog for sale cheap, he pursues the offer with natural skepticism… 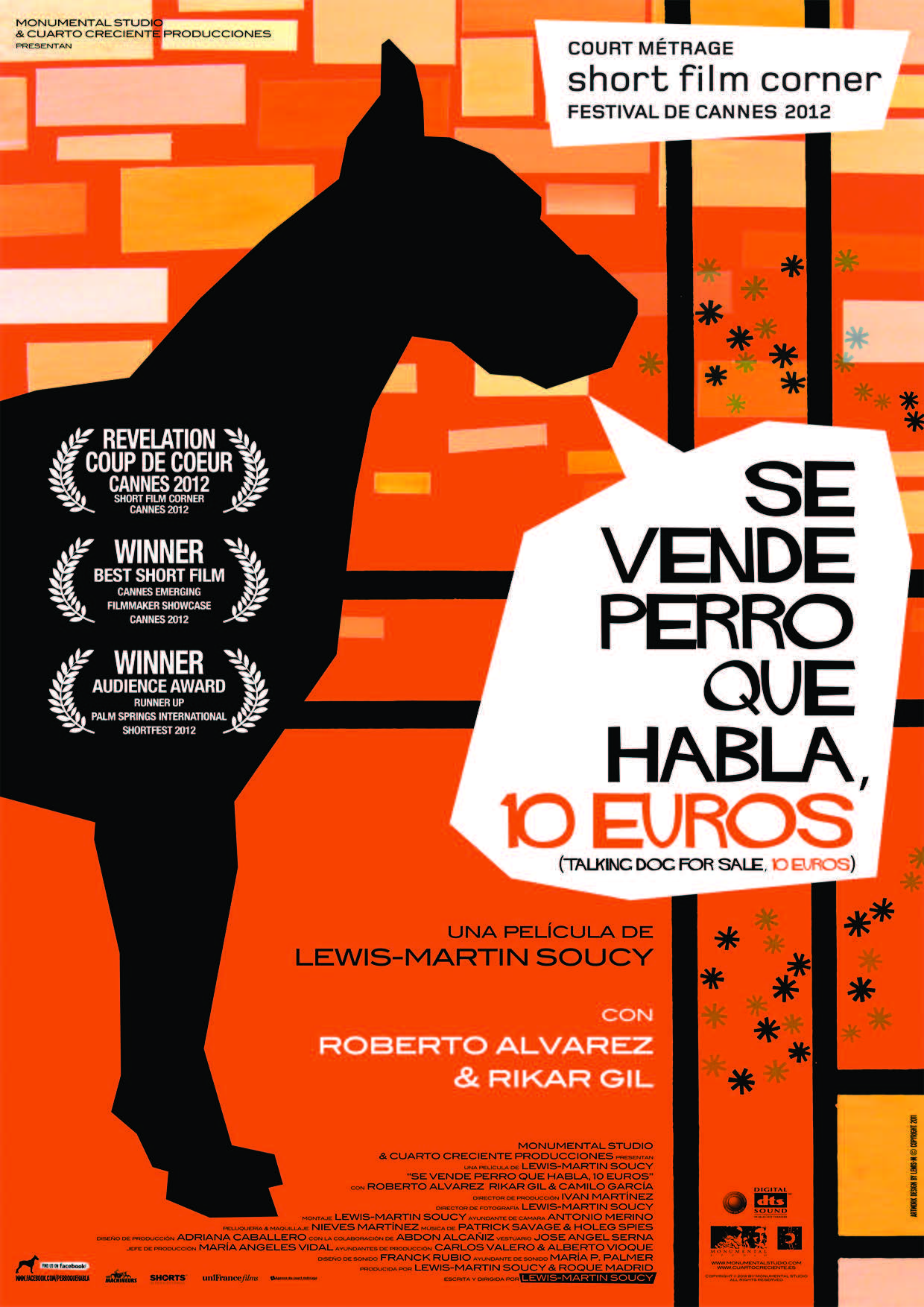 Go Social Film Magazine I saw your film at the San Jose Short Film Festival. They screened it several times – on the opening night, the closing night, and one of the comedy nights. It had an amazing success among the audience.

LEWIS I wish I were there because we won the Audience Award in San Jose actually.

GSFM Well deserved! It’s a very funny film. Where did the story come from?

LEWIS It’s actually a joke that my stepfather sent me by email a long time ago, back in the early days of emails when you’d have a lot of spam from your relatives, a lot of funny stories, those emails that would just be forwarded to everyone a million times. It just stayed in my mind, and I thought at some point I could make a movie out of this. Of course, I had to transform it into more of a story.

GSFM When writing the story did you already know you were going to shoot in Spain and cast Spanish actors?

LEWIS I totally did. I discovered Spain in 2004. I love Spanish movies and Spanish actors, and there was an actor at the time I was a big fan of who was completely unknown, especially in America, but very famous in Spain, named Javier Bardem. Now he’s won an Oscar a couple years ago for best actor in No Country for Old Men. He was just someone I wanted to work with at the time, so I wrote this script with him in mind. I turned this dog joke into a story and wrote a different ending as well. At the time, something I really wanted to do was not show the dog; I thought it was a really bad idea to show the dog, in my opinion anyway. I didn’t want to get into that funny business of having to coach a dog, even on the production set, it was not my intention to have an animal at the level of having a trained dog. I just wanted a normal dog and keep it plain stupid and surreal, sarcastic.

Then on the last day, I was having a drink in a park in the centre of Madrid, and my friend said “it’s Javier Bardem just behind you!” Of course I didn’t believe them. It was Jarvier Bardem, right there, behind me. The first thing that naturally came out of my mouth was “There you are! I’ve been looking for you all week!”

So I wrote that script, I went to Spain, and for a week I tried to find Javier Bardem. At the time, it wasn’t an easy job, because in Spain nobody was organized in production, I had nobody’s number, there were no agents, no books, no websites. Every company was in their own little corner doing their own little films. There was absolutely no connection between people in the industry, no websites, no industry book, nothing. I think they were still working the old fashioned way where everybody has people’s personal phone number, and they just call the actors directly when they need them. So I stayed in Spain for a week trying to find Javier Bardem. I was walking into video stores, checking out the DVD’s of the movies he was in, writing down the producers and distributors names from the sleeves. Then I was going out in a public phone booth, flipping through the Yellow Pages trying to find their addresses and numbers. I didn’t speak Spanish at all at the time, and no one in Spain spoke English, it was a real nightmare. So I was going directly to their offices, knocking at their doors, asking them how I could find Javier. I was looking for Javier the whole week. Then on the last day, I was depressed, no Javier, having a last drink with the friends I was staying at in a park in the centre of Madrid, and someone was bumping into me, we were literally back to back for over an hour, when my friend said “it’s Javier Bardem just behind you!” Of course I didn’t believe them, but the expression on their face was so genuine with surprise that I turned my head around, persuaded it was a joke. It was Jarvier Bardem, right there, behind me, turning at me at the same time. The first thing that naturally came out of my mouth was “There you are! I’ve been looking for you all week!”

GSFM Amazing. What did he say?

LEWIS He said, “really”, I said, “yeah”, then we started talking, and we hung out for the rest of the night, and he gave me his number. It was very funny because he was laughing at the story.

GSFM Why didn’t it work out?

LEWIS When you work with people like that, it’s very hard to put a schedule together because they’re very busy. So we tried for two years, but it didn’t work out, mostly because Bardem was getting very famous at the time, lots of meetings in Hollywood, meeting with Steven Spielberg a lot, trying out for a couple movies like Minority Report, and Munich, which he turned down. He was just looking for the right American movies to start his career in America. So at the time, I was trying to make my short film with the dog, and at some point after two years, it was too complicated, so I dropped the project because I couldn’t imagine doing it with anybody else at the time.

GSFM But after 10 years you finally managed to make the film and very successfully. Was it luck again?

LEWIS Luckily I was the DP on a feature film in Spain, just by chance I had some friends who put me in touch with companies, and I started working in Spain a lot for a year. I met with these guys, I DP’d a feature there, and at some point we were having coffee with a producer, and he heard about that Bardem story because a lot of people around me knew that story as it was part of my life, and part of a lot of other people’s lives at the time, and it was making me crazy all the time. My sister even wanted to go to LA and punch Steven Spielberg in the face at some point because he was screwing with my schedule.

My sister even wanted to go to L.A. and punch Steven Spielberg in the face at some point because he was screwing with my schedule.

So I told that story, and I pitched the film, and they said, “listen, when we wrap the feature, we’ll keep a small part of the crew, and we’ll shoot that short film”. They had another short that they wanted to produce and wanted me to be DP on as well. The director of that feature was shooting the short right after the feature, so we did those two shorts back to back. He DP’d mine, and they introduced me to these two amazing actors that you saw in the movie now, Ricar Gil, and Roberto Alvarez. I just went along, and we shot that film in a couple of days in the South of Spain, in Cartagena, and that’s pretty much how the whole thing happened.

GSFM That’s a great story. I know that you’ve been quite successful at the festivals, at Cannes, Palm Springs and 20 other film festivals in less than six months. What is your recipe of making a successful short film?

LEWIS I’ve made half a dozen short films, and more and more I tend to go towards simplicity, to be very economical in my shots, to focus on the acting, and a good story. I think the audience really likes comedies. As much as I’d love to do something else, I’m really driven towards comedies because I haven’t read a lot of dramas scripts that attract me. This film was shot in two days, every shot I shot is in the movie, the editing was very simple. I was just editing one shot after the other, there was no cutting room rejects. There is just one shot that didn’t make it in the final edit. There was a bit of dialogue with the main character at the beginning when he’s having coffee, he was getting a phone call, I was trying to establish him as a business guy, a serious real estate guy getting into a crazy situation, but it was dragging the film for an extra minute or two that wasn’t necessary. I think from the minute you see this guy and see his face, how he reacts, and his suit, I think the character is established perfectly. To go back to what I was saying earlier, keep it short, keep it simple, and make it funny. That’s my recipe anyway.

GSFM I know that when you were younger you used to do a lot of acting, stand-up comedies and even wrote some scripts. How did you become a director after all?

LEWIS I think I picked directing because I was staging all my shows, and writing them too, and I think the work I’ve been doing since I was a kid, since shooting on Super 8, has always been directing. I think I was directing myself into a lot of things, a lot of projects, and I always loved comedy, and at the time, I think I was more of a show-off than I am right now. Now I have a couple of feature projects in development that I also wrote. It’s going really slowly because you always depend on your contacts, and it’s more about the contacts and the talent unfortunately in this business. In the meantime, I make shorts because I like them, and I produce my stuff, so I don’t have to wait for funding.